Clostridioides difficile infection (CDI) accounts for a substantial proportion of deaths attributable to antibiotic-resistant bacteria in the United States. Although C. difficile can be an asymptomatic colonizer, its pathogenic potential is most commonly manifested in patients with antibiotic-modified intestinal microbiomes. In a cohort of 186 hospitalized patients, we showed that host and microbe-associated shifts in fecal metabolomes had the potential to distinguish patients with CDI from those with non–C. difficile diarrhea and C. difficile colonization. Patients with CDI exhibited a chemical signature of Stickland amino acid fermentation that was distinct from those of uncolonized controls. This signature suggested that C. difficile preferentially catabolizes branched chain amino acids during CDI. Unexpectedly, we also identified a series of noncanonical, unsaturated bile acids that were depleted in patients with CDI. These bile acids may derive from an extended host-microbiome dehydroxylation network in uninfected patients. Bile acid composition and leucine fermentation defined a prototype metabolomic model with potential to distinguish clinical CDI from asymptomatic C. difficile colonization.

Metabolomic characteristics of the patient cohort. 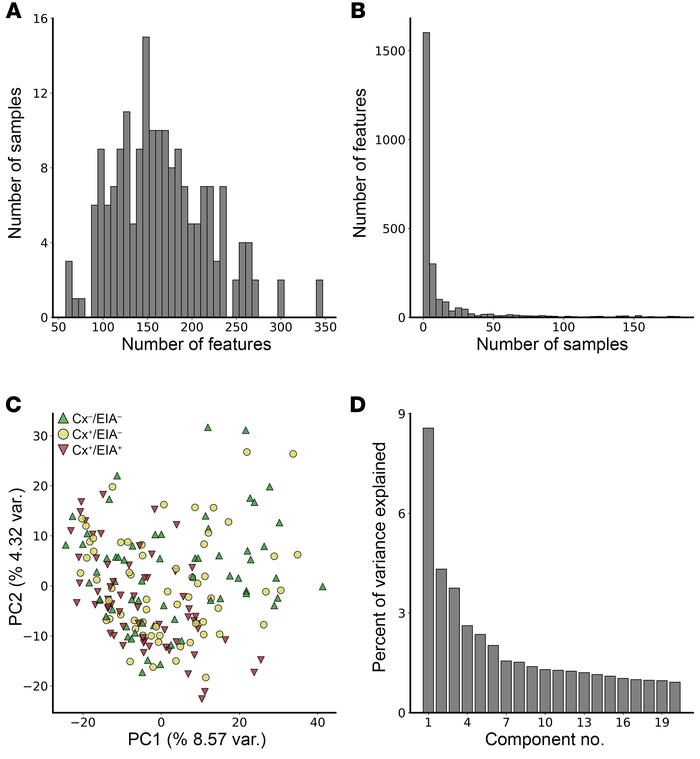 () Histogram showing the distribution of feature richness (number of features present per sample) across all patient specimens. () Histogram showing the number of samples within which each unique feature is present. Fecal metabolomes were highly individualistic: among the more than 2000 features detected, most were infrequent. While the resulting data are very sparse overall, the distribution has a relatively heavy tail with a few features present in many samples. () Principal component analysis (PCA) score plot across the first 2 components created using log-transformed feature intensities across all metabolomic features. () PCA does not appear to reveal dominant modes of variation, with no single component explaining more than 9% of the variance and a long tail of modes each explaining approximately 1% each.